Web Design: The Biggest Logo Trends So Far in 2014

Smartphone use has increased from 21 percent in 2010 to more than 63 percent today. Add in the fact that 83 of Americans are online regularly, and you get a quick picture of how many people are on their mobile devices at any given point in time. It’s almost as if we’re watching the world go by through a window the size of an index card. Intriguing? Definitely. But in order to grasp people’s attention and keep it there, brands must ensure that they are meeting their audience’s needs through bright, vivid and attention-grabbing logos.

This year’s Trend Report sheds light on how designers are responding to a growing online mobile audience, and which ones are succeeding. In general, we’re seeing logos that are simple but never boring. Flat designs with mono-weight lines. Brighter and lighter colors, typography and symbolism. And while digital elements are incorporated into nearly every logo design, it’s still up to brands to make them personal so that people connect emotionally and have a short escape from the digital world.

Let’s take a closer look at the biggest logo trends so far, as outlined in the 2014 Trend Report.

Mono-weight line work has gained serious attraction for icon designers thanks to its simplicity, refinement and intrigue. This look focuses on single-point design lines that are incorporated into a mono crest. The lines have the right balance, too, since they’re not too thick and not too thin.

Stacking letters, often in all caps, is another designer favorite. These designs deserve a second look because they appear to be puzzles or building blocks. As interesting as letter stacks are, this design is not for all companies. The number of letters must match the size of the design and the number of lines being considered.

With this technique, designers remove about 40 percent of the letterform so that it looks like the letters dazzle from afar. Although the design isn’t entirely intact, the logo remains legible and easily interpreted.

Facets were created back in 2010 and have been popular ever since. The geometric shapes are simple and flat, but the intersecting planes offer definition and volume for the viewer. There are four emerging strains this year, including facet fields, crystals, type facets and flat facets.

Waves – or three or four curved lines – are not limited to Wi-Fi. Instead, they’re popping up all over the place for brands that want to send out the message that they are connected to their customers. Look for more brands to use these few simple lines to represent connection and communication, either digital or analog. 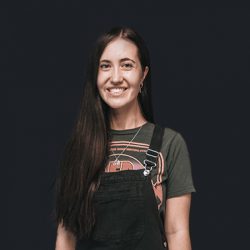