11 Things All Web Developers Should Know

Are you interested in becoming a web developer? There’s a lot to learn in this industry, but you can succeed with a positive attitude and the desire to understand what makes websites great. The best part is that the job of a young creative never gets boring! You will work in teams and independently. Experience pays off, especially as you begin to develop good language skills, logical thinking and patience.

Let’s look at 11 things that all web developers should know!

1. Shell Basics. Shells are the command line syntax and utilities that Mac, Linux and Unix use. Language tutorials help with learning shell commands, but eventually, you will want to learn these on your own.

2. JavaScript. Every modern developer should learn JavaScript, as you will be working with it at some point. Fortunately, there are many online courses that you can take to learn about data types, functions, objects, loops and more.

3. SQL and NoSQL Queries. If you plan on building a web app, your data will most likely be stored in a database. You don’t have to be an expert in these databases, but it’s a good idea to have a basic understanding of how data is stored.

4. Browser development tools. Modern browsers have debuggers that can be added as extensions. Chrome’s development tools are most popular and will help you understand what the front code is doing.

5. Back-end and Front-end Language. Front-end development refers to the part of a website that users interact with, such as HTML, CSS and JavaScript. The back-end language works to support the front-end of a website but users don’t see it. As a web developer, you will be engaging in plenty of back- and front-end talk!

6. Git. Git is the gold standard for source control and version control for all open-source projects. The projects are hosted on Github, a cloud-based Git program. Even though there are other predecessors, Git is the clear winner and is expected to be around for a long time.

7. Integrated Development Environment (IDE). An IDE is a text editor that is made for developers. An IDE consists of a code editor, debugger and build automation tools. It is typically used to group code together and display the files into a left tree panel.

8. JSHint. Javascript is an uninterrupted language where you can write what you want and have it run. If there is a syntax error, the code will be blocked. To solve this, use the JSHint tool checks for errors.

9. HTTP calls. When your web browser looks for a file from a web server, it’s making an HTTP response. For speedy, efficient websites, familiarize yourself with reducing website HTTP requests.

10. JQuery. jQuery is an awesome tool to have on your hands because it makes things like animation and event handling simpler. This “Write Less, Do More” tool is a free and open-source platform.

11. Write tests. The most successful web developers tend to write tests before they write code. Though it might seem like a lot of work, it can be easier to write tests that fail and then write code that passes.

If you are considering being a web developer, don’t let the idea of learning code scare you away. The industry is highly rewarding and has plenty to offer blossoming developers. By learning the 11 things above, you will have one foot through the door! 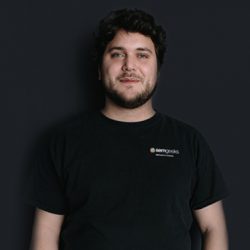 James Geiger is a Lead Developer with degrees in Computer Science and English Literature from Brookdale Community College and Elon University. Serving as technical advisor to management and providing programming perspective on client requirements, his teams are responsible for prioritizing software reliability, scalability and performance. In his free time, you can find him cooking and spending time with family.